The journey started in my second year of medical school. I took a short break from my studies and a lot of time to think about life and healing. “Why did I decide to become a doctor?” I asked myself. I spent a lot of time alone asking many such existential questions to myself. After I completed medical school, this search for meaning in life led me to accept the life of a celibate student in a monastery studying the ancient Indian scriptures and pondering about life’s fundamental philosophical questions. Several years later, I decided to move on in life… asking myself “What am I supposed to do in life?” I worked in a government medical center and exposed myself to the corruption in the health sector and subsequently trained and worked as a hospice doctor watching people in the last phase of their life. The completeness of life came full circle. As I pondered “what is the meaning of complete health?” the concept of Purnarogya took birth. When I gave up my job as the director of a hospice, and rejected the offer to head the Department of Palliative Medicine in a multinational hospital,… I did not know where I was going. Guided by my inner voice, I desperately searched for healing. I studied Traditional Chinese medicine, Sujok acupuncture, Pranic healing, Medical astrology, Naturopathy, Yoga… and finally entered into Ayurveda. All rivers ultimately lead to the ocean. It was not easy to say the least, but it was fulfilling. A two year online course from an Ayurveda school in the USA was insufficient to quench my thirst. I joined an Ayurvedic hospital in Kerala to observe and learn further, started writing a curriculum hoping that this would serve as an impetus to study and understand Ayurveda. Training at the National Institute of Panchakarma came after a wait for 18 months. My attraction towards authenticity and antiquity led me to read the Ashtanga Hridayam. It was fascinating but undecipherable without a teacher. I hunted around to look for teachers who would teach me the Ashtanga Hridayam. A stroke of sheer mercy it was… I received the association of none but the best – living legends in the science of Ayurveda…I would discover that later. My quest for the secrets of healing took me from seminar to seminar, teacher to teacher and what began as notes during this study journey took the shape of a book. The first of many volumes of Ashtanga Hridayam was born. I always loved teaching and Ayurveda gave me enough opportunities to do that. It was a dream was to create an academy to share all that can be learned in Ayurveda, a platform where the best of the teachers could share more, the traditional practices of Ayurveda could be researched, revived and preserved. It came true in December 2015.  Purnarogya Holistic Health Care Pvt Ltd was born. Ayurveda is resurrecting… and it will happen. The question is how can we be a part of it? The journey goes on… come and join the movement.

Born into a family o 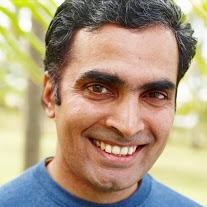 f traditional physicians of Kerala, he was introduced to studying the art of Traditional Indian healing called Ayurveda after which he went on to specialize in modern western medicine. While working in California, Wales and India with terminally ill patients he was able to see the limitations of the modern approach.  Exposure to several alternative therapies at San Diego Hospice and hospices in the UK triggered him to go back to his roots and integrate eastern and western traditions to solve the maladies of the present day. Spending many years in meditation in a monastery in India, extensive studies in the Vedas, Ayurveda and alternative healing and working with experienced Ayurvedic traditional healers of the Ashtavaidya tradition in Kerala (his home town) provided a solid foundation for the same. He believes that the underlying cause for all disease as the reckless modern lifestyle causing stress leading to toxin accumulation and misalignment of the body, mind and spirit. To prevent, treat and educate people is his passion and mission. He has taught on several national and international platforms. His courses are also available online. He is a visiting lecturer at the University of Copenhagen, Denmark and a reviwer of articles for the Journal of Alternative and Complementary Medicine.

He presently serves as the Director of Food for Life Medical Center in Vrindavan, India and is also Co-founder and Director of Purnarogya Holistic Health Care in Kerala, India. He recently published a translation and commentary on the classic Ayurvedic text named “Ashtanga Hridayam” which is the first of a 25 volume series, written especially in way that is helpful to the students in the western world. This will positively transform the way in which Ayurveda is learned and practiced in the western world.

Bringing with him a vast experience of over 20 years, living in monasteries, interacting with saints and healers alike and traveling around the world, he confirms “Any one branch of healing applied exclusively gives slower results and is less effective. But the integration of the techniques gives tremendous power to healing with quicker and better results.”