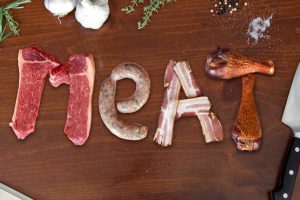 Though they clearly do not encourage the consumption of meat as regular food, the ancient Ayurvedic texts explain the nature and effects of various types of meats in a very peculiar manner for those who do. First of all the animals are classified in a very interesting manner. When you look at the list, you can find birds like crows, sparrows or owls in the same category of animals like cows, camels or bears. One would wonder why ? What kind of a classification is this ?

Classification according to various parameters

In Ayurveda, the different meats are not classified according to the morphology of the living entity or their nutritional value. The different types of meats are classified according to the behaviours of the animals, birds etc their eating methods, activity patterns, sleep patterns, habitat and such other characteristics. Why ? This is because our ācāryas were concerned more about knowing the effects the different meats would have on the human body. For example, all the meats are usually hot in potency (virya) but there are some exceptions which are cooling in potency and these are all grouped under a separate category.

The meat of carnivorous animals are characteristic in the fact that they produce a pungent (katu) effect after digestion (vipaka). The male and female of the same species also have different effects on the human body when consumed. Who would imagine that ?

The different parts of the body of the meat of the same animal have different effects on the human body when consumed. There are also differences in the effects between two legged and four legged animals.

Need to know the pathologies to appreciate the classification

Though the descriptions of the foods are in the early part of the literature, one will really be able to appreciate the descriptions only after having studied the physiology and pathological variants that occur in the human body. For example when it is said that the meat of carnivorous animals is good for chronic hemorrhoids (jīrṇa-arśas), one will need to know that the pathology of chronic hemorrhoids is due to a vata kapha disorder resulting from irregularities in agni and apana vata.

Natural behavior of the animal influences qualitative effects of the meat

The behavior of the animal influences the effects that its meat produces. For example if an animal sleeps too much, eating the meat of that animal will result in increased kapha in the gross body as well as tama guna in the subtle body. If an animal eats a lot of different types of leaves and actively jumps around all the time, its meat will be light and easy to digest. The effects of different meats on the various bodily functions are also described. This means that the acharyas of the past had devised various methods to understand that. Of course there can always be some exceptions which are categorized separately.

Here again the functional nature of the Ayurvedic science becomes apparent as opposed to the structural nature of modern nutritional science.

To classify a food based on its carbohydrate, protein, fat, vitamin and mineral content is a structural evaluation. The fact that a certain meat contains more protein does not make it any healthier.

To classify the meats based on whether they are heavy or light to digest, laxative or constipative, influence on the three doṣas and so on is a functional classification. The latter is preferred in Ayurveda.

To determine which kind of meat is healthy

“Meat of animals that are freshly slaughtered, clean and young is suitable for consumption. Meat of animals died naturally, emaciated, rich in fat and those which have died of diseases, drowning or poisoning are to be avoided from being consumed.” (Reference – AH. Su. 6. 69). This means that meat that is transported or stored in refrigerators are not recommended according to Ayurveda as beneficial for the body. So much for the meat industry. It appears that the only possibility of eating meat that is healthy in any way is to kill the animal and eat it immediately. Or else it is nothing but slow poison.

Thus we can conclude that the effect of the meat on the human body is more important than the taste or nutritional value. And this is how Ayurveda has classified them as beneficial or not. Of course the classification in the ancient texts does not include the case of an animal who is chained in a closed space all his/her life, injected with steriod hormones and antibiotics, cruelly exploited, beaten, tortured, stripped of his/her skin while alive and painfully slaughtered. Imagine what effect it would have on our bodily functions ! We may need to add that as a special category when we update the texts. Thank you for reading.

P.S: This article is not meant to recommend or promote meat eating in any way. The author of this article is himself a strict vegetarian for the past 25 years. Ayurveda does use meat or meat products in certain life saving medicines.